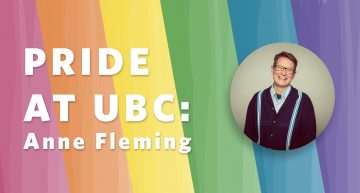 Anne Fleming is the author of five books, most recently poemw, a book of poems shortlisted for the BC Book Prizes’ Dorothy Livesay Poetry Prize, and The Goat, a novel for children. Her non-fiction has been published in a raft of anthologies, including Queers Were Here, Persistence: All Ways Butch and Femme, Great Expectations: Twenty-Four True Stories About Childbirth, and You Be Me. She teaches Creative Writing at UBC’s Okanagan Campus.

The first pride celebration I went to was in Toronto in 1986 – and it was very much a march, not a parade. It was celebratory, for sure, but there was a strong sense of transgression, of taking back the streets, of a really delicious openness in public affection, in looking dykey, of being both out and out there. It mattered deeply to me. It felt brave to be there – important and powerful.

Vancouver’s Pride Parade—parade, not march—when I moved here in the early 90s felt weird to me, I think because I just find parades weird — smiling people with Vaselined teeth waving and trying to get people to buy their stuff.

“It felt brave to be there – important and powerful.”

The parties felt weird to me, too, like I was supposed to be having more fun than I was actually having.

But the artfulness, the inventiveness of drag queens, was and remains a joy and a delight. And the various political groups and community groups — the Rainbow Band, Pinoy Pride, gay water polo players, Proud Anglicans, Dykes on Bikes, Greater Vancouver Native Cultural Two Spirit Society, PFLAG, random leather daddies, random semi-naked people — remind me how big our community is and how much variety exists within it, how many lives, how much life. Of course, because the LGBTQ2SIA+ community encompasses so many individuals in so many communities, one size does not fit all. There are problems, divisions, deep disagreement, as there are bound to be.

“One size does not fit all.”

Turns out I like being in the parade far more than watching the parade (which, I confess, I often brought a book to, finding a place on the sidelines to read). The first time I was in it was with Out West Performance Society, a queer theatre company in the 90s. And then, when our kid was a baby in the early 2000s and up until age 5 or 6, we walked with the Queer Families group. The kid loved giving out candy along the parade route. When the daycare asked if there were any holidays our family celebrated that they should know about, we said Pride.

But I realize by writing this piece that I have become complacent about Pride. Is it important? (Honest, unthinking answer: I guess). Do I go? No, not for a while now.

“I need to not be complacent.”

Robin Stevenson recently won an American Library Association’s Stonewall Honor Award for her children’s book, Pride. In the speech she gave for the occasion just a few days ago, she reminded me how important Pride is:

When I launched this book, just over a year ago, I said that I wrote it because I wanted LGBTQ youth to know that they have a history that they can be proud of and a future that looks better all the time. But since then, the political climate has shifted, fueling racism, transphobia and homophobia and bigotry in all of its forms.

So I can no longer say to young queer people with any sense of honesty that the future looks better all the time. What I say instead is that they have a history they can be proud of, and a future that is worth fighting for – and that their generation is picking up that challenge and often leading the way.

Is Pride important to you? Share your thoughts with us by tweeting our multi-campus accounts @EquityUBCV / @EquityUBCV.