A New Wave of Intercultural Sharing on UBC’s Okanagan Campus 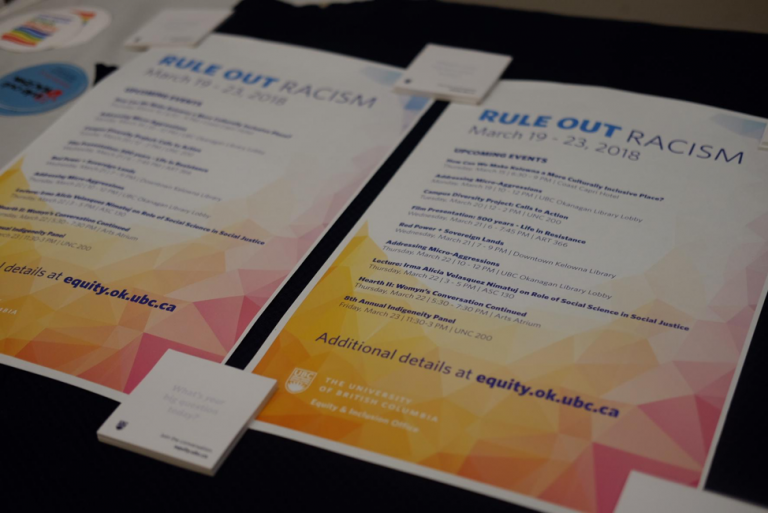 The latest hashtag to grace our phone screens last month? #RuleOutRacism2018. The hashtag hashtag represents an annual weeklong campaign run by the Equity & Inclusion Office, that, since 2013, seeks to increase awareness and literacy around race and racism at UBC Okanagan.

Timed to raise awareness of the International Day for the Elimination of Racial Discrimination (March 21st), the campaign was a collaborative initiative that brought together voices from across the university and the region, resulting in a series of heartfelt and educational events.

Highlights from the Week

A Dialogue with Alumni UBC: “How can we make Kelowna a more culturally inclusive place?” 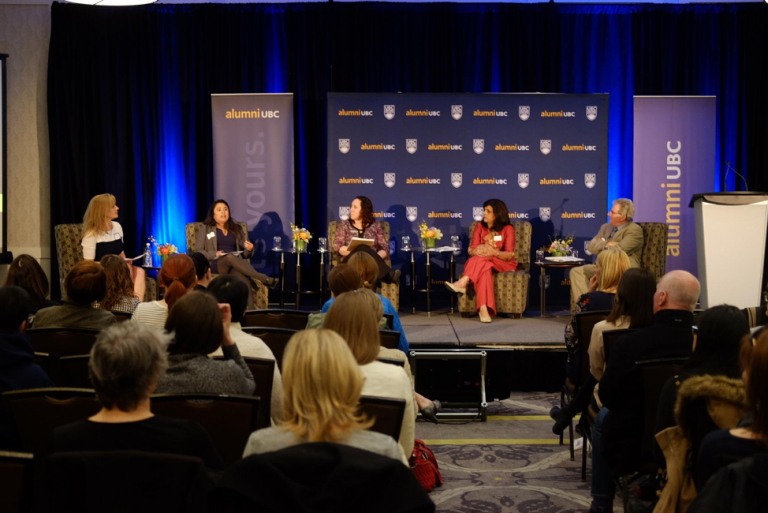 The first event was organized in collaboration with Alumni UBC. They hosted a dialogue around the question of “How can we make Kelowna a more culturally inclusive place?.” A panel of diverse speakers discussed the intricacies of Canada’s silent discrimination. Panelist and UBCO Nursing Assistant Professor Dr. Susana Caxaj noted that “In Kelowna, access is an issue – both in terms of getting to resources, as well as accessing them.”

Challenges discussed include a lack of mental health resources that cater to intercultural needs, as well as affordable and safe housing for low-income migrant workers. There were about 65 people who attended the event, including alumni, community members, and UBCO staff, faculty and students. 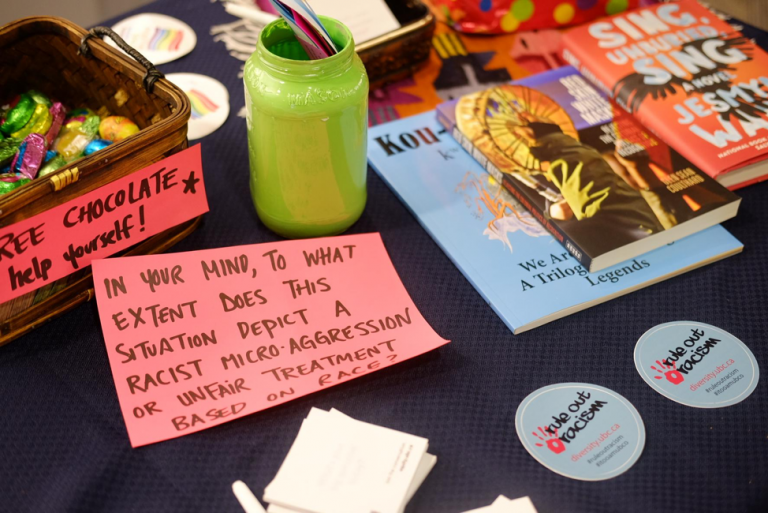 A micro-aggression is a form of subtle or unintentional discrimination directed toward a racialized individual. As an isolated event, these actions may seem harmless and even funny. However, over time they become internalized and contribute toward the “othering” of racialized people.

The Equity & Inclusion Office took the lead on several educational initiatives throughout the week, including hosting an interactive booth aimed to build capacity of individuals to address micro-aggressions on campus.

The booth in the library encouraged students to deconstruct problematic behaviours that we hear and say, but aren’t always sure how to challenge. A micro-aggression is a form of subtle or unintentional discrimination directed toward a racialized individual. It’s like when someone pulls on your braids without your permission, or says that you should feel complimented when they pet your afro like you’re a dog. As an isolated event, these actions may seem harmless and even funny. However, over time they become internalized and contribute toward the othering of racialized people. Fellow work study student Amal Hassan reflected that “having a booth addressing micro-aggressions was important since these incidents occur many times without notice”. Work study student Sayma Hussain shared a similar sentiment in stating “sometimes an individual may not be aware that certain things they are saying or doing may appear racist…it’s important to be open-minded at all times.”

Certainly, the booth generated a lot of ideas for students, and helped to shed light on something that many racialized students face both on and off campus. As a follow up to the conversations at the booth, EIO partnered with Kelowna Community Resources to provide a free workshop, open to the public, on Anti-Racist Allyship. The workshop was facilitated by Jenica Frisque, Equity Facilitator, and Joban Dhanoa, a Masters of Social Work student, and was attended by 14 people from across campus and the community.

Our take-away? Allyship is an action, rather than an identity. It takes time, practice, and patience to unlearn prejudice and bias based on racism and colonialism. 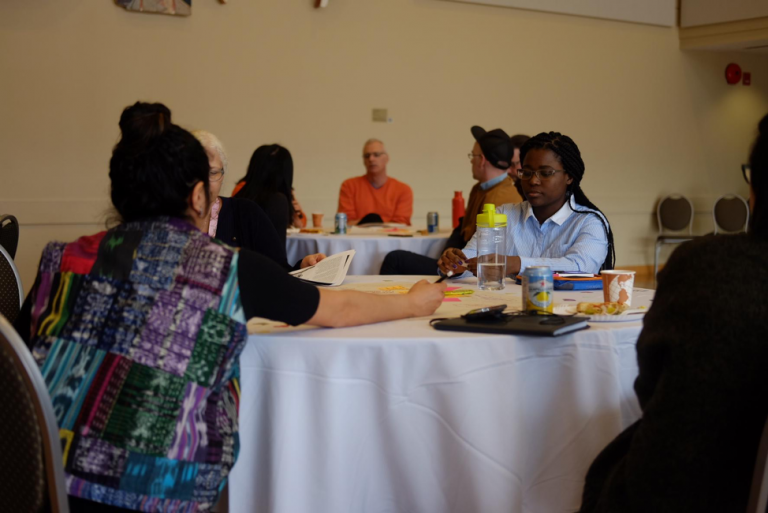 The second major event on March 20th was the launch of the newly released Campus Diversity Report. Written and edited by a research team made up of UBC Okanagan faculty and students, the report highlights the inequalities and discomforts experienced by racialized, and/or Indigenous, and/or queer students on campus. As a person of colour on campus, I found the Campus Diversity Report did an amazing job of expressing some of the concerns that I feel and see around me. Sayma noted that “improvements are needed in Health and Wellness”, so that culturally diverse and queer students can feel welcomed and understood. The report also brings attention to the consolidation of information and expression, the process which leads to us being taught a very particular version of history. Amal also reflected that “not enough classes address the systemic ways that power and white privilege” take precedence in the university setting. Ultimately, both the report and the discussions facilitated during the event called for more intercultural-minded resources that can support international students and those who would otherwise fall through the “cracks in the system”. 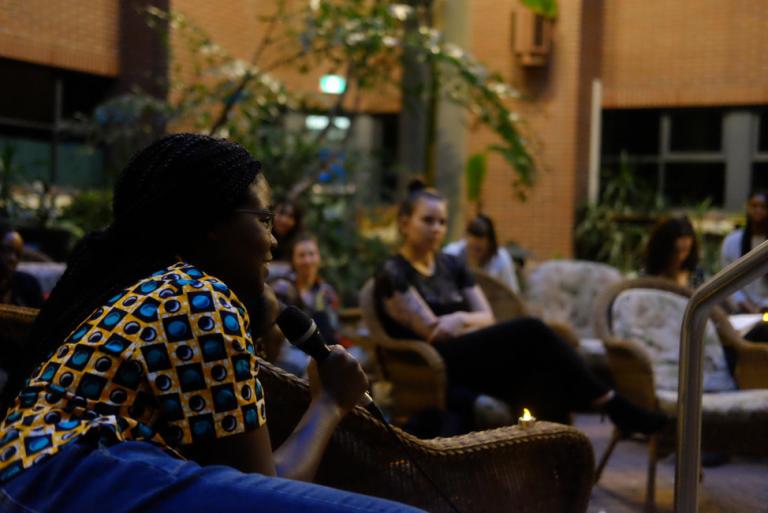 EIO was proud to collaborate with the International Programs and Services to host Hearth II: A Womyn’s Conversation Continued. The first Hearth event happened during Black History Month. The event seeks provide an inclusive space in which panelists and audience members share their thoughts on current issues around womanhood, race and Indigeneity in Canada, and obstacles toward diversity. In the cool of the Arts Atrium, participants gathered around as panelists laid down knowledge on the plight of racialized women – women who are most noticeably the most disenfranchised individuals in any society. 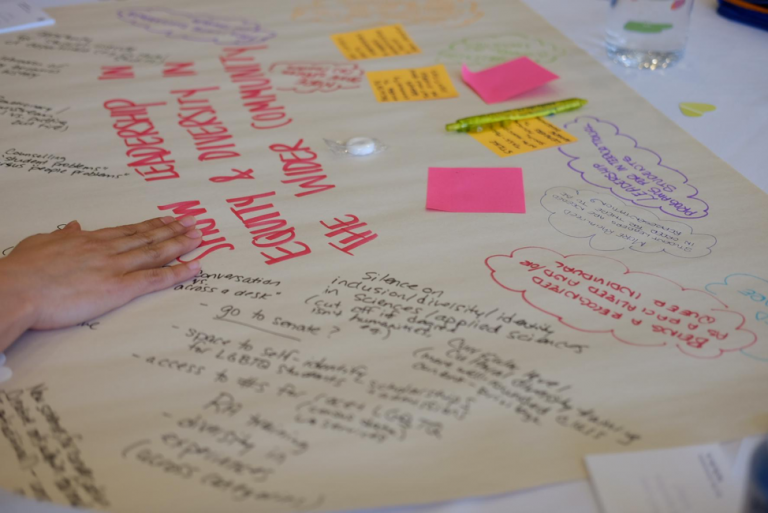 #RuleOutRacism2018 brought together diverse members of our UBCO students, faculty, and staff community and provided safe spaces where racial identity on campus could be unpacked. From the week long social media campaign on Instagram, to people staying after events to ask more questions, the week proved to be a fruitful opportunity to learn and unlearn how we see race on campus. Consider keeping the conversation going by volunteering as an Equity Ambassador or stopping by the International Programs and Services to learn more about the Intercultural Development Program!

Story Credit: Dela Hini is a Work-Learn student staff member of the Equity & Inclusion Office. Dela helped organize several of the above events. The above is a reflection of their experience.